The Bitter Root Humane Association was formed in 1972 by a group of local animal lovers. In 1984, Countess Margarite Bessenyey gave the group land on Fairgrounds Road and Betty Cook, as President, led volunteers in raising money to build a shelter. That building served as a temporary home for countless animals for over 35 years. During that time, the shelter also housed hundreds of animals during the major wildfires of  2000 through 2016, and took in animals from numerous neglect and hoarding cases, including the recent, highly publicized Husky case. Time, however, took its toll and that shelter became unsafe and non-functional for our staff, volunteers and animals that call the shelter home. In March of 2020, after over a decade of fundraising efforts, construction began on a new, modern shelter which opened to the public in July 2021.  We are proud to say, we have no time or space limits to finding the perfect home for our “guests”! 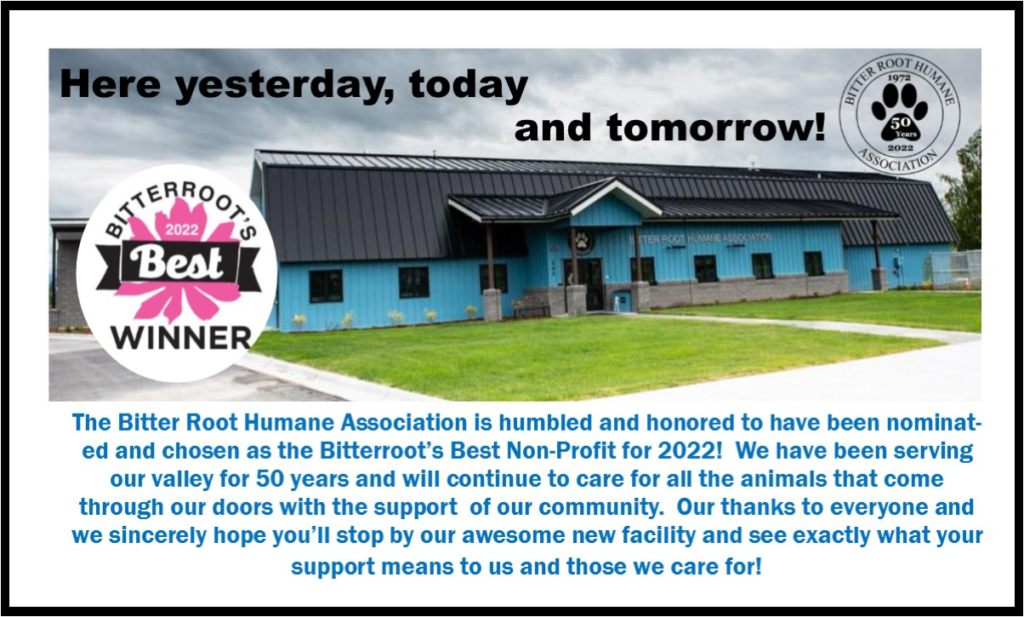 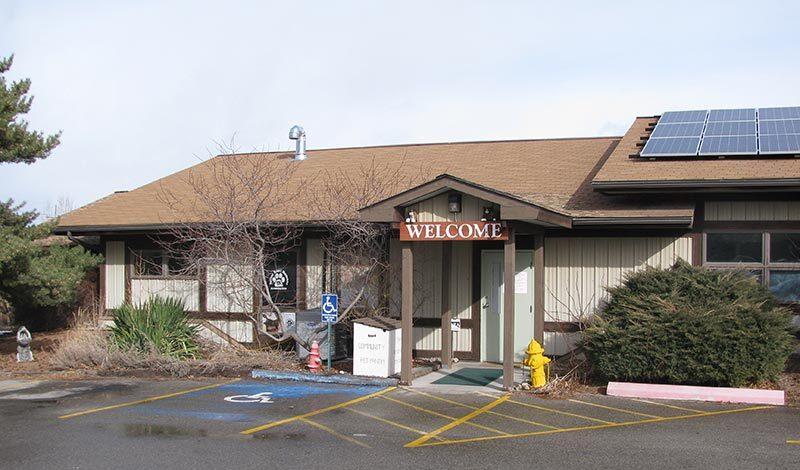 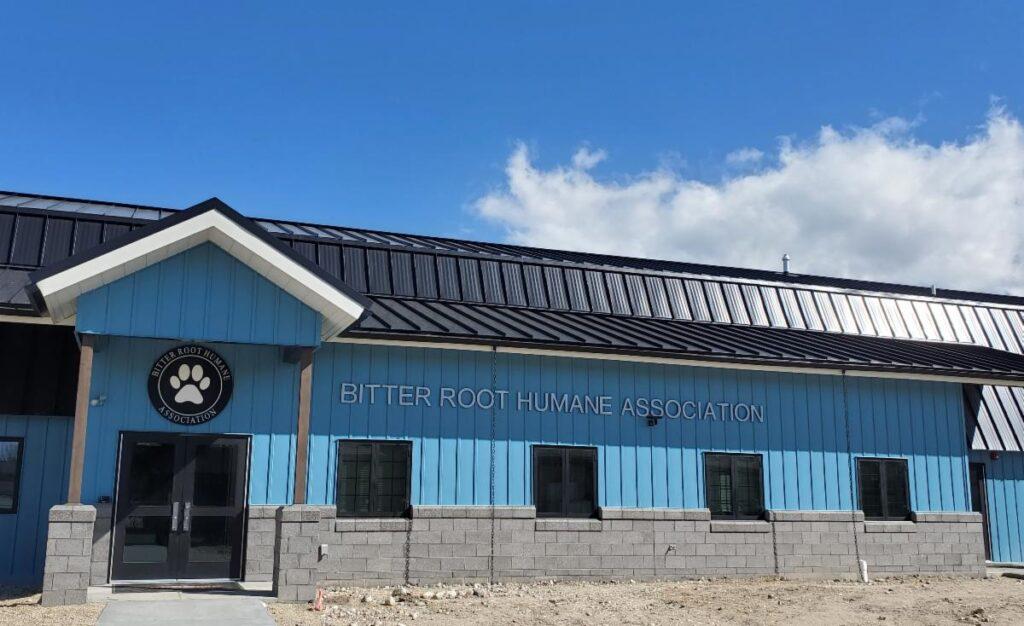 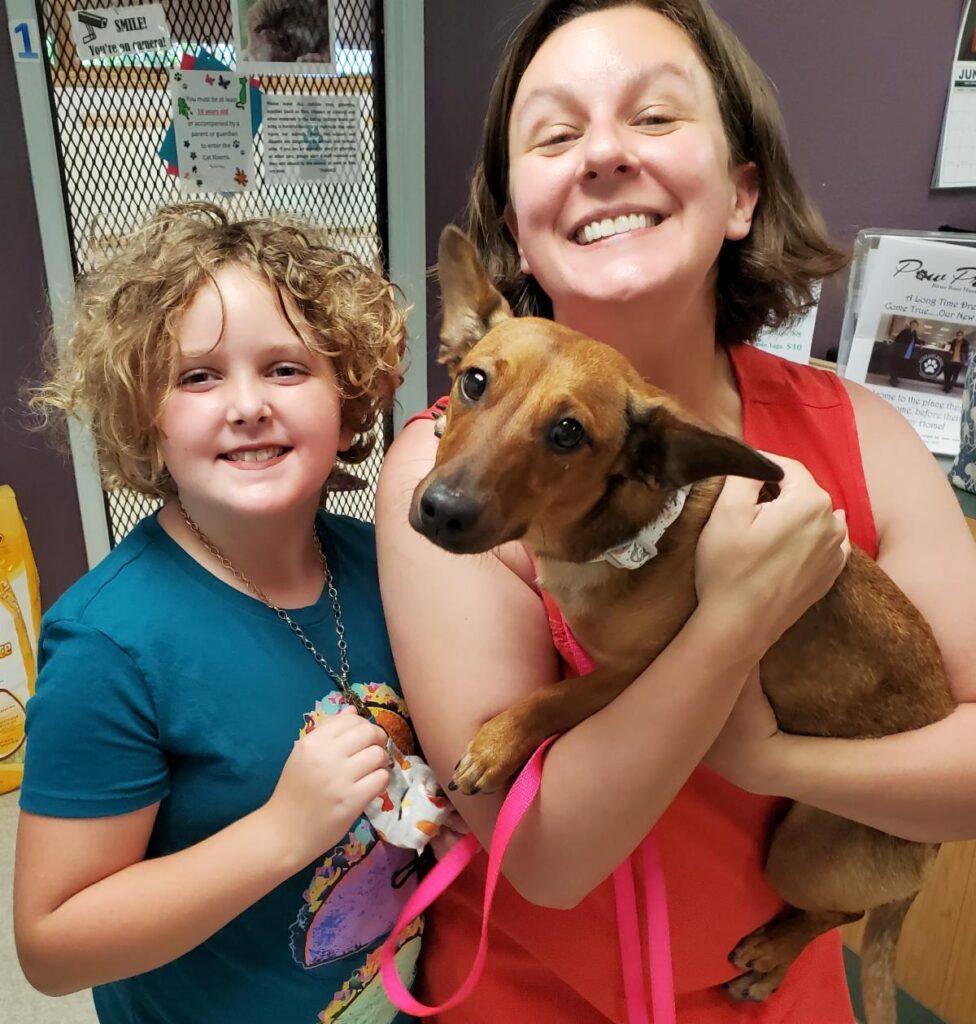 Our mission is to provide caring, compassionate shelter and enrichment for homeless companion animals, find loving lifelong homes, reunite pets and owners, promote population control and advocate for all animals.

As we settle into our new home, we will continue to require funds for operating costs and for paying off the costs of our new building.  The Bitter Root Humane Association is a private non-profit organization, which receives no ongoing taxpayer funding, is totally funded through the generous donations and support of our community. Our future depends on you and with your support we can continue caring for all the animals that come through our doors! 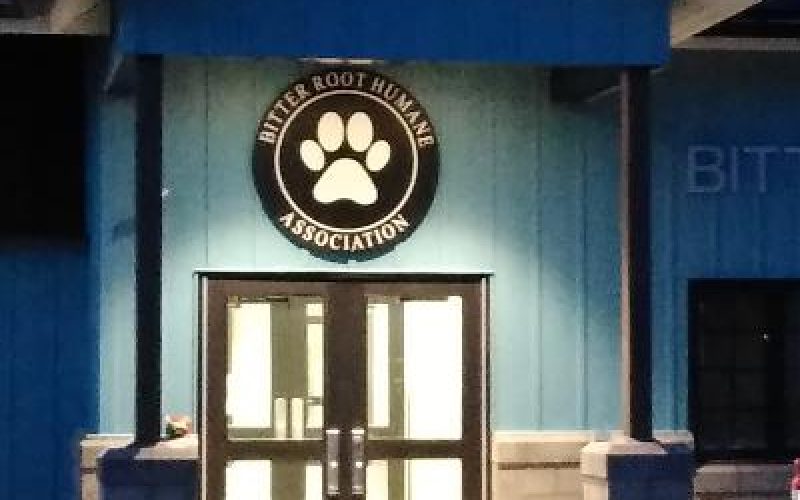 Our staff consist of compassionate, knowledgeable and dedicated employees who make sure that all the animals coming through our doors are safe, loved & cared for until their forever home can be found.

The Bitter Root Humane Association is a private, non-profit 501(c)3 organization and is operated by a volunteer Board of Directors. The Board provides supervision and control of the property, business and activities of the Association and is comprised of seven (7) to thirteen (13) volunteer members each serving a three-year term, with elections to these positions taking place at the organization’s Annual Membership Meeting usually held in March of each year.

Would you be interested in serving on the board? Any BRHA member in good standing is welcome to send a Letter of Interest to the Board of Directors stating your willingness to serve and a brief explanation of “why” you feel you would be a benefit to the BRHA. Our Nominating Committee will then schedule an interview to discuss any questions you might have and explain the election process.

Anyone wishing to contact the Board may do so by writing to:
BRHA BOARD of DIRECTORS
P.O. Box 57
Hamilton, MT 59840
or email at: BRHABoardofDirectors@gmail.com

Designed by a pet owner at Touch Point Designs, LLC in Hamilton, MT